This project initially started as a proof of concept but quickly grew into something very useful. For the past year or so it became quite popular and plenty of bugs came out of the cracks, but also useful feedback for features too!

You can download the packages straight from NuGet: WebApiProxy Provider and Web API C# Proxy Generator

Here are a quick summary of issues resolved and features introduced in the latest version:

In case you've missed it, please feel free to read more on WebApiProxy and how to get started with it on this introductory blog post

Thanks to great community feedback and contributions, WebApiProxy is now supported on Web APIs hosted on OWIN. Unlike the previous release, where the service meta-data endpoint just worked by automatically registering on start-up, it has now changed to a manual registration that one needs to make in order for it to activate. This was implemented to be more in line with the upcoming ASP.NET 5 (vNext) style of ad-hoc opt-in model. Another great thing is that there is no dependency on System.Web anymore!

To register the proxy engine for activation, simply add the following line to the Register function inside the WebApiConfig class:

In the previous release the metadata exchange endpoint address was fixed as /api/proxies but is now changeable by passing your own custom route into the RegisterProxyRoutes() function:

Enums and Constants support in DTOs

The recent release includes support for abstracted HTTP response messages with IHttpActionResult as the return type of the actions. You can tell WebApiProxy what response type is expected by decorating the actions with the ResponseType attribute:

Any documentation annotated on and inside your data transfer objects, will also now be available on the metadata for a richer experience in C# clients.

WebApiProxy went through a major refactoring process and most crucial bugs were fixed during this time, like duplicate model resolving that caused the endpoint to break.

I am proud to announce that the C# client generator is now completely compatible with Portable Class Libraries and works on Windows Desktop, Silverlight 5, Windows 8, Windows Phone 8.1, Universal Apps, Xamarin.iOS and Xamarin.Android.

The C# client-side proxy generator initially worked on a build task triggering a call to a remote service for metadata to generate client side code every time. This code was magically part of the project assembly and not easily viewable. Issues relating to remote isolated build servers were also reported. Luckily this has changed. Now, upon installation of the package, an empty class is added to the project that gets regenerated on your terms.

A new attribute in the configuration file is introduced to allow one to explicitly opt-in for automatic code generation on every build. This function is turned off by default and can be easily activated by setting the generateOnBuild attribute to true.

It is now possible to utilize the NuGet Package Manage Console for generating client side code on demand by using the WebApiProxy-Generate-CSharp Powershell commandlet straight from within Visual Studio.

Gone are the days where one needed to unload and reload the project after installing the client side package as it now contains everything it needs to generate the proxy. In the new version, you will find that things have moved a bit. 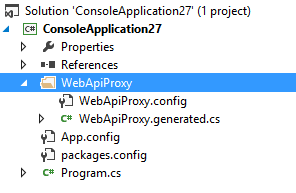 All the WebApiProxy specifics are now neatly tucked away under a folder called WebApiProxy that contains the generated code and the configuration file, which also got a bit of a make-over as it now only requires the MEX endpoint URI of the service.

It's been a long wait but the time has finally come for more interesting features on WebApiProxy. This video…

Fiddling around with XML responses

My year started with new challenges, first of which is malformed and unformatted XML. One of the requirements of…